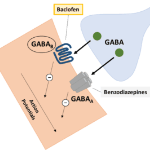 Baclofen is a skeletal muscle relaxant that acts centrally as an agonist on gamma-amino-butyric acid-B (GABA-B) receptors. It is commonly used for the treatment of muscle spasticity that originates from spinal cord or cerebral lesions. Baclofen penetrates the blood-brain barrier and at high doses may cause toxic effects. Common symptoms of Baclofen overdose include depressed mental status, hypotonia, hyporeflexia, and respiratory depression [1]. Less common symptoms are seizures, coma, apnea, autonomic disturbances, cardiac conduction abnormalities and rhythmic hiccup-like respirations. This case report describes some of the rare clinical presentations of Baclofen toxicity that were seizure and bradycardia in a pediatric patient. The ethics of the study have been reviewed and approved by Tehran University of Medical Sciences Institutional Review Board.

A 4-year-old boy presented to our emergency department with a decreased level of consciousness. His parents found the child sleepy lasting for more than 4 hours so they got help from emergency medical service. As they searched for the cause, they noticed the ingestion of 6 tablets of 20-milligram Baclofen by the child accidentally. Past medical history was negative for mental or developmental pathologies, and neither the child nor his family did not have a history of seizure. Furthermore, there was no sign or history of trauma, and the child did not receive treatment elsewhere. On arrival, he seemed hypotonic and vital signs were as follows:

He was a well-developed child for his age. Physical examination of the heart, lungs, abdomen and vascular system was unremarkable. On neurological exam, he was confused, did not respond to verbal or tactile stimuli, but slowly opened eyes slowly, localized pain and moaned to pain; therefore, had a Glasgow coma scale of 9. He had dilated symmetrical pupils with a poor reaction to light. Gag reflex was intact, and airway protection was acceptable. There was no facial or general motor asymmetry. The plantar responses were extensor bilaterally. He was hypotonic, but deep tendon reflexes were normally elicitable. No focal neurologic deficits or meningeal signs were detected. Other examinations including sensory, extrapyramidal and cerebellar function could not be performed with regard to the mental state.

As the time of ingestion assumed to be more than one hour before arrival, gastric lavage or gastrointestinal decontamination were not considered effective.

The patient seemed to be in a postictal phase of a seizure attack. After 30 minutes, another tonic-clonic seizure occurred without improvement in patient’s consciousness between attacks. So intravenous midazolam was administered to control status epilepticus. Seizure was controlled by benzodiazepine without improvement in his level of consciousness. After two midazolam doses, he was treated with phenobarbital as a second line drug for status epilepticus. Following phenobarbital, seizures stopped, and the patient was responsive to tactile stimulus after 1 hour.

Electrocardiogram showed sinus bradycardia with normal voltage and intervals. Urine Toxicology screen test and other laboratory tests were normal including normal blood glucose, Calcium and Magnesium, Urea and creatinine and electrolytes. Brain Computed Tomography showed no abnormalities. After 8 hours, he was completely awake and able to drink. Based on the acute onset and the resolution of a suggestive toxidrome, normal imaging and laboratory data and no fever or meningismus signs, baclofen toxicity was strongly considered. He was discharged home, and after four months follow up, he was in good condition without any neurologic sequel.

Acute baclofen toxicity presents with major clinical manifestations including central nervous system involvement (altered level or content of consciousness to deep coma, flaccidity, symmetric hyporeflexia and seizure), respiratory depression, autonomic disturbances and cardiovascular events either bradycardia or tachycardia, hypotension or hypertension and first degree of cardiac block that can be presented within 2 to 6 hours of ingestion [2,3]. Our patient was an otherwise medically normal child exhibited obtundation, hypotonia, bradycardia, mydriasis, non-convulsive and convulsive seizures without gaining consciousness in between. Convulsive seizures or status epilepticus are not common in baclofen toxicity and was mainly reported in critically-ill patients, intrathecal use or in older children [4,5]. Baclofen overdose was expressed by a decreased level of consciousness especially in the presence of cerebral lesions [1, 2, 3, 4, 5, 6].

Baclofen therapeutic dosage range is 15 to 80 mg/day and therapeutic blood level is 80–400 ng/ml [7]. Baclofen therapeutic dose is initially 300 micrograms/kg daily with a maintenance dose of 0.75–2 mg/kg daily. Signs of toxicity occurred after ingestion of 100 mg of Baclofen or more. Baclofen toxicity has been reported in different settings such as intrathecal use, renal insufficiency, hepatic dysfunction and co-ingestion of tricyclic antidepressants or monoamine oxidase inhibitors [1,8]. These patients are at risk of Baclofen toxicity in lower doses [7].

The exact mechanism of seizure induced by Baclofen has not been well understood.

Seizures due to intrathecal Baclofen are usually seen in conjunction with underlying disease such as brain injury [1]. Additionally, seizure has been reported in some young children with cerebral palsy after Baclofen ingestion [9]. Predisposing factors of Baclofen toxicity are fever, toxic-metabolic or electrolyte abnormalities, accidental Baclofen overdose, sudden withdrawal of oral Baclofen, low serum sodium levels and post-operative settings [10].

The treatment of Baclofen toxicity includes supportive care such as respiratory care and hemodynamic support. Gastric lavage will be effective if ingestion occurs within 1 hour. Severe hemodynamic instability requires urgent resuscitative measures as well as compromised airway which should be secured by intubation and mechanical ventilation until the resolution of symptoms; otherwise less severe intoxications with neurological and cardiovascular symptoms can be controlled conservatively. Hemodialysis is reserved for patients suffering from severe overdose and chronic renal function impairment [11].

In this case with no underlying disorder, Baclofen toxicity occurred after ingestion of 120 mg Baclofen. The patient presented with neurological and cardiovascular symptoms and all were managed by conservative treatments.

The authors have declared that no competing interest exists

FR, MS, and MB participated in the conception and design, manuscript writing, critical revision and final approval of the article. Data collection for the study was performed by FR.

Background. Baclofen is a muscle relaxant agent that in toxic doses exhibits symptoms such as depressed mental status, hypotonia, hyporeflexia, and respiratory depression. Seizure is a less common presentation of Baclofen toxicity, especially in pediatric patients.
Case Description. The patient was a 4 year-old boy with no previous neurologic disorder who experienced status epilepticus after ingestion of high dose of Baclofen orally. He was treated conservatively and after 8 hours, he became awake in good condition without any abnormal finding in imaging or laboratory tests.
Discussion. This case describes some rare clinical presentations of Baclofen toxicity that were seizure and bradycardia in an otherwise-normal pediatric patient which could be managed conservatively.