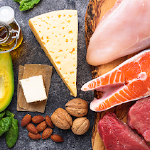 Epileptic encephalopathies(EE) are severe conditions characterized by paroxysmal activity on the electroencephalogram (EEG) that is often aggressive, seizures that are commonly multi-form and intractable, and severe cognitive and behavioral disturbances that present or worsen after the onset of epilepsy. The ketogenic diet (KD) has been shown to be effective in the treatment of refractory epileptic encephalopathies, and has been suggested as an early treatment option in very young children.

Although the experience is often anecdotal and mostly consists of case reports and case series, the aim of this study was to present our own experience and an overview of the current literature on the diet in patients with EE.

Some encephalopathies, such as epilepsy with myoclonic and atonic seizures, West syndrome, Dravet syndrome, or Lennox-Gastaut syndrome, are well recognized and known to have a good response to the ketogenic diet, while others are more rare or only recently identified, such as epilepsy with focal migrating seizures in infancy, febrile infection-related epilepsy syndrome, or myclonic status in non-progressive encephalopathy, about which little is known and the KD is only tried in sporadic cases.

EE are typically refractory to the antiepileptic drugs and the KD  should be considered earlier in the therapeutic scheme of these severe epileptic syndromes. The KD including the oral formula may be considered in all pediatric patients with EE even in infancy.

How to Cite
Caraballo, R. (2018). The use of the ketogenic diet in the treatment of epileptic encephalopathies. Journal of the International Child Neurology Association, 1(1). https://doi.org/10.17724/jicna.2018.66
Download Citation
Endnote/Zotero/Mendeley (RIS)
BibTeX