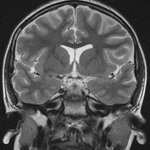 Sodium valproate (VPA) is a widely used antiepileptic for the treatment of paediatric epilepsy. A rarely described serious adverse reaction to VPA therapy is a reversible encephalopathy, characterised by cognitive regression and behavioural disturbances associated with cerebral atrophy. With consent, we report a case of VPA-induced reversible cerebral atrophy in an 11-year-old girl with temporal lobe epilepsy. A search of the literature conducted using PubMed and OVID databases with search terms “valproate”, “atrophy” and “encephalopathy” identified six case reports of VPA-induced encephalopathy from 1987–2014. As literature is sparse, all cases were reviewed with acknowledgement of the bias associated with time and case reporting. Neuropsychological changes measured by standardised testing were reported in four cases. No data has been presented in the last ten years. This case report provides further detail describing neuropsychological changes. Predominant clinical findings include markedly reduced alertness, impaired processing speed, and manipulation of verbal information.

The patient presented aged seven years with focal seizures with left temporal epileptiform activity as well as generalised discharges noted on electroencephalogram (EEG). VPA was commenced as the initial anti-epileptic. Her epilepsy proved resistant to medication as seizure freedom was not obtained despite increasing VPA dose, with subsequent trials of adjunctive carbamazepine (ceased due to rash), levetiracetam and clobazam.

Initial MRI brain prior to VPA therapy demonstrated no signal or structural abnormality (Figure 1A). A cerebral flurodeoxyglucose positron emission tomography confirmed left temporal lobe hypometabolism. At age 9 years 4 months drowsiness, reduced concentration and memory difficulties were noted, particularly affecting school performance in mathematics and spelling. A gradual decline in alertness and cognition continued over the next year, and it was recognised this was out of keeping with the usual effects of polypharmacy.

Brain MRI was repeated at age 10 years 5 months. Although initially reported as normal, the brain MRI (3T) demonstrated mild generalised parenchymal atrophy and ventricular enlargement (Figure 1B). At the time, VPA level was high at 854umol/L (350–700) on 38mg/kg/day VPA. Serum examination was otherwise unremarkable. As VPA-induced encephalopathy was suspected, the medication was ceased as a primary intervention, rather than investigate for metabolic and/or genetic causes of generalised atrophy in the context of epilepsy.

Cognitive capacity was assessed using Wechsler Intelligence Scales for Children IV (WISC–IV), non-standardised word lists, and visual reproduction (see Table 1). At the time of the clinical symptoms, full-scale intelligence quotient (IQ), verbal comprehension, perceptual reasoning, and working memory were ranked average. A significant discrepancy was noted in terms of her processing speed, which ranked low-average (score – 80; 9th percentile). Neuropsychological examination reported difficulties with mental manipulation and abstraction within the verbal domain, and reduced capacity to manipulate verbal information in memory. It was assumed that this would specifically impair her performance in subjects such as mathematics and spelling.

VPA was ceased with dramatic improvement in clinical symptoms within one month. Oxcarbazepine was trialled with a pleasing reduction in seizure burden. She currently has rare auras (monthly) and is maintained on oxcarbazepine monotherapy.

This case further describes a form of VPA-induced encephalopathy characterised by cerebral atrophy and cognitive decline. Previously reported clinical manifestations include: (1) cognitive regression including a deterioration in baseline IQ [1 2 3 4 5]; (2) impaired memory and concentration [1 2 3 4]; (3) a reduced level of awareness from apathy [2 3] to a stuporous coma [1]; (4) a behavioural disturbance including emotional lability [3 4] and developmental regression [3]; and (5) occasionally motor signs including tremor, dysarthria and ataxia [1 2 3]. Motor signs were normal and did not evolve in this case.

Reversibility of both clinical manifestations and cerebral atrophy are hallmark features and are diagnostic. Baseline function and intelligence rapidly return over the course of weeks to months [1 2 3 4 5]. Restoration of the normal brain anatomy on computed tomography/MRI lags clinical improvement, yet is achieved between one to two years, as occurred in this case [1 2 3,5].

Previous reports of VPA-induced encephalopathy have demonstrated reduction in full-scale IQ and verbal comprehension index [1 2 3 4]. In this case, verbal skills, memory, and processing speed were particularly affected. Previous reports of children with deficits in working memory (particularly phonological and complex working memory) show concomitant language deficits and impaired comprehension of language and mathematics [6]. Our case did display difficulty with these areas: mathematics, spelling, and impaired manipulation of verbal information in memory. Processing speed has not been significantly impaired in other reports of VPA-induced encephalopathy, though this was a striking feature of both impairment and then improvement in this case. This case provides further information regarding cognitive features potentially impacted in VPA-induced atrophy and may help other clinicians to distinguish VPA-associated cognitive decline from another new or previously unsuspected pathological process.

The presence of cerebral atrophy, often a sign of a neurodegenerative process, prompts clinicians to investigate for an underlying neurometabolic process. In the setting of generalised atrophy and altered cognition or awareness, VPA-induced encephalopathy is an important differential due to its iatrogenic nature and its reversibility. It is important to recognise this entity to potentially reduce the burden of unnecessary testing with associated costs and familial anxiety, and to shorten clinical symptomatology affecting the child.

From a pharmacological viewpoint, there is evidence this is not a dose-dependent or toxic encephalopathy, as previous cases note therapeutic VPA levels [1 2 3 4 5]. The underlying pathological processes that occur in VPA-induced encephalopathy with atrophy and cognitive decline remain unclear. Underlying mechanisms that have been proposed include inhibited neuronal outgrowth [8], γ-aminobutyric acid (GABA) mediated dopamine inhibition [9] and a mitochondrial mutation affecting the MT-ATP8 gene [10]. Overall, it is recommended that investigations are limited and VPA discontinued as a priority.

VPA-induced encephalopathy is rare but reversible, and is therefore important to recognise. Investigations should be limited as discontinuation of VPA is advocated as primary intervention. This case adds further information regarding the neuropsychological profile of patients with VPA-induced encephalopathy, with verbal skills, memory and processing speed particularly affected.

We would like to thank our patient and her family for their support.

The authors have declared that no competing interest exists.

Background: Valproate (VPA) has been previously described to cause reversible cerebral atrophy and cognitive decline, but few cases are reported and neuropsychological data is lacking. We report a case of VPA induced encephalopathy in an 11-year-old girl with temporal lobe epilepsy, presenting with impaired cognition and sedation combined with cerebral atrophy.

Conclusion: This case provides an important reminder of this rare but importantly reversible syndrome with new information supporting the neuropsychological changes involved.