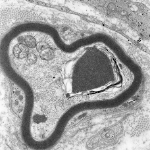 The first patient was referred because of frequent falls at the age of 4 years. She had an ataxic gait and weak Achilles tendon reflexes. Two years later, pyramidal and more prominent cerebellar signs became evident. A skin and muscle biopsy revealed intra-axonal spheroids in the peri-and endomysial myelinated nerve bundles as well as in the motor endplates, which led to the diagnosis of PLA2G6-associated neurodegeneration (PLAN). Brain iron accumulation occurred at follow-up MRI at 9 years of age.

The second patient was referred because of developmental stagnation and detection of elevated liver enzymes at 3 months of age. Seizures started at 15 months of age, and were refractory to treatment with multiple anti-epileptic drugs. Molecular genetic testing using an epilepsy gene panel revealed a mutation in the WDR45 gene, a known cause of beta-propeller protein-associated neurodegeneration (BPAN). Brain MRI at 14 months of age showed diffuse hypomyelination in the absence of BIA.

This report highlights that NBIA can be suspected on a clinical basis and confirmed by genetic testing before iron accumulation becomes present on brain MRI. Early diagnosis will provide a longer timeframe for potential disease modulating treatments in the future.

How to Cite
Hoogwijs, I. (2019). Diagnosing neurodegeneration with brain iron accumulation before iron starts to accumulate. Journal of the International Child Neurology Association, 1(1), 17. https://doi.org/10.17724/jicna.2018.117