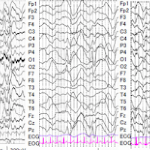 West syndrome is one of the most severe forms of epileptic encephalopathy. This syndrome, especially symptomatic type, shows intractable spasms and the long-term mental and seizures prognoses are generally devastating. A study concerning the outcome of infantile spasms in adult patients reported that more than 50% of the patients remained in a state of severe intellectual disability. Seizure outcome 20-35 years after infantile spasms was reported that 58% of the patients had seizures in any type, and 18% of them had Lennox-Gastaut syndrome 1.

Neuro-immuno-modulatory therapy, such as ACTH or prednisolone, is currently the most effective treatment for infantile spasms, however, the precise mechanism underlying suppression of spasms is unclear till now 2.

Here we report a girl, who presented with symptomatic West syndrome after multiple intracerebral hemorrhages because of congenital protein C deficiency, in whom tacrolimus was beneficial in reducing her spasms.

A girl aged 1 year and 11 months was delivered by Caesarean-section at 37 weeks of gestation because of fetal heart deceleration. Multiple intracerebral hemorrhages (Fig. 1-a) and purpura fulminans on the legs were noted at birth. And She developed retinal hemorrhages at age 8 days. Because of extremely low protein C activity (<10%), she was diagnosed as having congenital protein C deficiency. Thereafter, combination therapy including warfarin, frozen fresh plasma, and activated protein C was started.

She manifested spasms in series at age 1 year and 2 months, and an EEG revealed hypsarrhythmia; thus, a diagnosis of West syndrome was made. She was not received ACTH to avoid the risk other intracerebral hemorrhages because of congenital protein C deficiency. She failed to respond to multiple antiepileptic drugs, including topiramate, sodium valproate, nitrazepam, levetiracetem, and lamotrigine. Only phenobarbital was partially effective. Vigabatrin was not tried because it was not an approved drug at the time in our country. Despite the maximal medical therapy, she had repeated purpura fulminans and was listed for liver transplantation. Because her parents were asymptomatic, having heterozygous mutations of protein C and relatively low protein C activity, they were not candidates for living donor liver transplantation. Furthermore, she had low priority on the waiting list of deceased-donor transplantation in Japanese organ allocation system 5.

She was referred for domino liver transplantation (DLT) at the National Center for Child Health and Development. In DLT, a selected group of liver transplant recipients can donate their explanted native livers for use as liver grafts in other patients 6.On her admission at the age of 1 year and 11 months, she manifested 10 to 20 series of spasms in a day. She could not hold her head up and showed remarkable generalized hypotonia and severe psychomotor delay. EEG before liver transplantation revealed diffuse sharp waves with some spikes at 1 year and 8 months (Fig. 2-a). MRI scans at 1 year and 3 months showed encephalomalacia mainly in the right parietal lobe as well as left frontal atrophy (Fig. 1-b).

We performed DLT using the liver from a patient with maple syrup urine disease. The details of DLT in this patient were described elsewhere 5.Tacrolimus and low-dose steroids (prednisolone 0.5mg/kg/day, orally) were administered as a standard immunosuppressant from the day of DLT. After she moved to the general ward from the intensive care unit, we noticed that she showed no epileptic spasms. On postoperative day 15, her EEG had dramatically improved, showing sporadic right parietal and occipital sharp waves, (Fig. 2-b) the serum tacrolimus concentration was 5.8 ng/mL.

On postoperative day 20, she was suffered from acute cellular rejection, and administration of steroid pulse therapy (methylprednisolone 10mg/kg body weight) for 3 days was started. At this point the serum tacrolimus concentrations were below the expected therapeutic levels mainly due to cytochrome p450 3A enzyme induction by phenobarbital. Although she was receiving phenobarbital after the DLT, the priority was to avoid acute cellular rejection. Phenobarbital was discontinued on postoperative day 28. After that, the blood concentration levels of tacrolimus increased to therapeutic range. She was continued on low-dose prednisolone (0.3 mg/kg/day, orally) after steroid pulse therapy, and had been tapered off. She was discharged on postoperative day 68 without any sign of spasm. Prednisolone was discontinued on postoperative day 98. EEG showed sporadic spikes and waves in the left frontal on postoperative day 51 (Fig. 2-c) There were no seizures until 2 years and 9 months after the DLT without anti-epileptic drugs. But she started to manifest epileptic versive seizures at age 4 years and 8 months, and an EEG shows sporadic right parietal and occipital sharp and waves. The development status at the current time is that she can hold her head, sit alone, and crawl, but cannot bring out any significant word.

The main outcomes of our case are that intractable epileptic spasms disappeared and epileptic discharges on EEG improved after liver transplantation, even after antiepileptic drugs were stopped. Although there may have been multiple factors and several immunosuppressives that influenced the outcome, three possible mechanisms which resulted in the disappearance of the intractable spasms have been considered: 1) the effect of steroid, 2) the effect of tacrolimus, and 3) the direct effect of the liver transplantation.

Neuro-immuno-modulatory therapy, such as ACTH or prednisolone, is the most effective treatment for infantile spasms, even today. Although the precise mechanism underlying seizure suppression is unclear, it is possible that tacrolimus functioned, at least in part, through a similar mechanism as that of ACTH and prednisolone. At present, understanding of the neurobiology of epileptic spasms remains speculative, but the clinical course of our case might support the hypothesis that developmental neuro-immuno-modulatory dysfunction was involved. The patient received steroid pulse therapy for 3 days during the cellular rejection and had been received low-dose prednisolone after that. It may have played an important role in improving the spasms and epileptic discharge on EEG. One of the reports about the effect of low-dose prednisolone in suppressing infantile spasms and hypsarrhythmia suggests that some patients given prednisolone (1mg/kg twice a day, orally, 2 weeks) responded although high-dose ACTH was superior to prednisolone for treatment of infantile spasms 7.In our case, low-dose prednisolone can attributed to the cessation of her spasms.

And also the several mechanisms that tacrolimus may have had a beneficial effect are considered. Tacrolimus is a calcineurin inhibitor, and calcineurin is a Ca 2+ -calmodulin-dependent serine/threonine protein phosphatase that is distributed widely throughout neural tissue and can regulate the activity of several ligand-gated ion channels, including γ-aminobutyric acid A receptor (GABAAR), that works as a part of fast inhibitory neuronal transmission mainly mediated through GABA in the cortex and the hippocampus 8

Another report has stated that there was a postsynaptic signal pathway of inhibitory synapse about Ca2+ entry through NMDA receptor from the extracellular space. And they have showed that calcineurin acts to dephosphorylate Ser327 of the GABAARγ2, components of GABAARs, which in turn undergoes lateral diffusion of GABAARs 12.

In kindling model, calcineurin activity is induced by status epilepticus, and it was observed that rats administered tacrolimus had inhibited dephosphorylated GABAARs and decreased calcineurin activity 13.Other studies also show that molecular mechanism between calcineurin and GABAAγ2 subunit permits synaptic excitability by a rapid and sustained reduction of inhibitory synaptic strength at CA1 synapses 14-16.

In addition, Sanchez et al. demonstrated that hypoxia-induced calcineurin activation is associated with dephosphorylation of GABAARs, suggesting a mechanism by which GABAergic inhibition may be downmodulated, and that pretreatment with tacrolimus in P10 rat pups that have frequent seizures induced by hypoxia suppresses the seizures and prevents an increase in calcineurin in vivo 17.They also suggested that Ca2+ -permeable AMPA receptors (AMPARs) and calcineurin regulate an inhibitory synaptic transmission that may play a role in the immature brain, and calcineurin inhibitors such as tacrolimus may have clinical potential in the treatment of refractory neonatal seizures 17.

Given these findings, tacrolimus, as a calcineurin inhibitor, is considered to inhibit the lateral diffusion of GABAARs and suppress cortical hyperexcitability through the avoidance of dephosphorylation of GABAAR.

Moreover, activation GABAARs is depolarizing in humans up to and including the neonatal period, and functional inhibition is gradually reached over development in humans 4. In our case, she was 1 year and 11 months when she was administered tacrolimus, so it was just a period of the maturational change in functional inhibition of GABAAR.

In addition, some immunomodulatory effects of tacrolimus are speculated. It is clarified that tacrolimus causes immunosuppression by blocking the calcium-dependent activation of antigen-reactive T-cells, inhibiting transcription of several cytokine genes, including IL-2.3 Several researches have been conducted on the immunologic aspects of West syndrome; Liu et al. reported significant increases in serum IL-2, TNF-α, and IFN-α in West syndrome18, and Shiihara et al. suggested that T-cell and B-cell activation have some role in West syndrome 19. In our case, the function of tacrolimus which inhibits the T-cell activation also may have had a beneficial effect. And also several studies demonstrate that immunophilin family of proteins, the FK506-binding protein, selectively modulate glucocorticoid 20.It can only be a speculation that this function may contribute to improve the developmental neuro-immuno-modulatory dysfunction.

As a similar case report, Nagao et al. reported improvement of neurologic prognosis and epileptic discharge on EEG in a West syndrome patient with propionic acidemia who received a DLT 21.However, unlike propionic acidemia, protein C deficiency is not a metabolic disorder causing metabolic decompensation. Therefore, we think that the liver transplantation itself did not influence the improvement of spasms and epileptic discharge on EEG in our case.

To the best of our knowledge, this is the first report that West syndrome can be improved by tacrolimus administration. Although the mechanisms for improved seizure control may be multifactorial, and our suggested mechanisms can only be speculations, our patient’s clinical course may support the notion that tacrolimus as a calcineurin inhibitor may be a potential therapeutic option for early-life seizures.

We would like to thank to Dr. Seiichiro Yoshioka (Department of Pediatrics, Shiga University of Medical Science Hospital) for treatment of the patient before her admission to our hospital.

The authors have declared that they have no competing interest.

In symptomatic West syndrome, multiple brain pathologies have been demonstrated as causal factors. Usually the epileptic spasms are intractable and the patients remain in a state of severe intellectual disability. Because adrenocorticotropic hormone (ACTH) is a standard and the most effective therapy for intractable spasms, neuro-immuno-modulatory aspects have been postulated to be involved in the pathogenesis, but details remain unclear. We here present the clinical course of a girl with West syndrome due to neonatal intracerebral hemorrhages secondary to protein C deficiency whose intractable spasms and electroencephalogram (EEG) abnormality improved dramatically after liver transplantation which included tacrolimus administration. Recently, many studies have shown that activation of calcineurin is involved in the enhancement of cortical excitability through the control of GABAergic inhibition. We speculate that tacrolimus, as a calcineurin inhibitor, may have played a role in the improvement of her spasms following liver transplantation by promoting GABAergic inhibition. This is the first report that West syndrome can be improved by tacrolimus.